Fallout 76 Preview: Like a Hybrid Between Fallout 5 and an MMO.

VATS has been completely overhauled for this installment

Fallout. Fallout never changes. Except for when Bethesda took over development and it went from an isometric RPG to a first-person post apocalyptic Elder Scrolls style game for Fallout 3 and Fallout New Vegas. And they also added the settlement construction feature in Fallout 4, and there are some vague memories of something called Brotherhood of Steel in the early 2000s. Maybe the opening sentence is a lie and there have been numerous changes to the franchise since its 1997 debut. Even so, the announcement of Fallout 76 introducing multiplayer to the series did come as a surprise and not one that was well received by many. Even though there are NPC sidekicks, and more recently, settlement management, part of the appeal of Fallout games was the whole lone wolf aspect. The introduction of playing in a world with other people drastically changes that feel, but Fallout 76 was advertised as not being a traditional MMO but a regular Fallout game that happens to include other players. This sounded strange and we couldn’t get the suspicion that this is The Fallout Scrolls Online out of our head, so we took a dive into the Fallout 76 to get some first-hand experience.

In a lot of ways this seems like the next proper iteration of Fallout,but things have changed after the tricentennial. Fallout 76 begins on Reclamation Day, when after spending 25 years in Vault 76 the player is free to leave and venture out into Appalachia. That is, once they complete the character creation process, grab the Pip Boy and navigate the empty halls, grabbing survival items and some SPECIAL cards. Something strange about Fallout 76 is how the player appears to be the last human alive. Within the vaults there are those helpful assistance droids that inhabit Fallout games, but no other people. This may be proven wrong later in the game, but there seems to be no living NPCs within Fallout 76.

The story progresses through holotapes and other recordings left by the residents before they died. Upon leaving Vault 76 the player, in this case named P.P. Mowicky, followed the trail to the Overseer’s CAMP, where instead of actually meeting her there was just a recording directing Mowicky to the ruins of a nearby village called Flatwoods, where Mowicky was again tasked with locating other volunteers in Flatwoods who were of course dead but left instructions to ensure the player’s survival. There were also plenty of corpses with no information strewn about the ruins, one of the funnier finds was someone who was apparently discarded headfirst in a trashcan with his legs sticking up in the air. 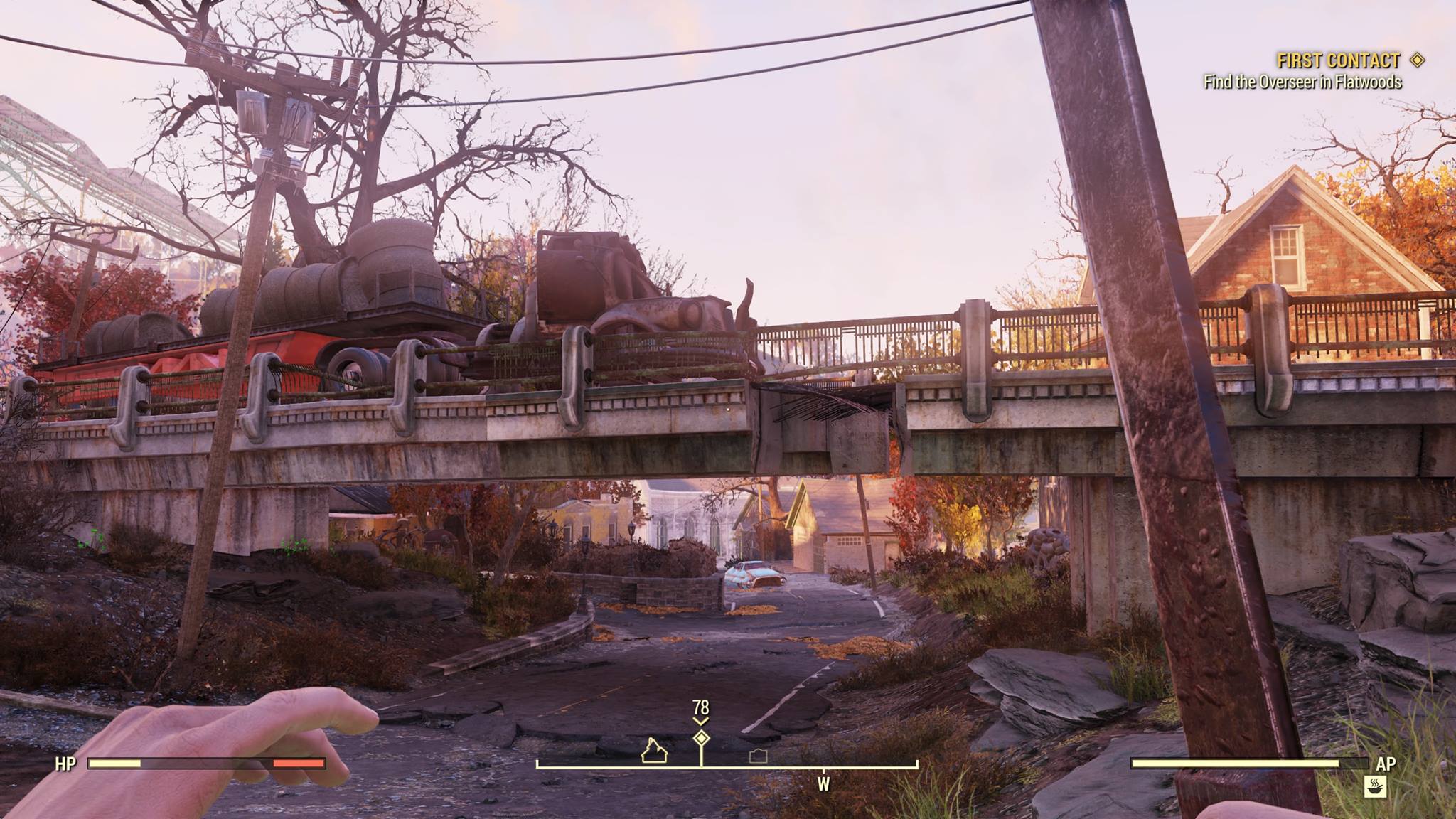 During this time Mowicky encountered a total of three other players, though that number will likely be higher when Fallout 76 is out of the closed beta. There are options to join a party with the other players or open up a trade menu, but the reality is ignoring them didn’t have any negative impact on the gaming experience. The lack of NPC characters seemed strange since their behaviors and conversations were part of what brought previous Fallout games. Certain aspects of the game kept the spirit of Fallout alive such as lumberjack automatons that brag about not needing lunch of lavatory facilities, but I’m not yet sold on the voices of the dead recordings as the primary means of advancing the story.

Gameplay mechanics for the most part are what we’ve come to expect from Fallout with some changes. In addition to keeping up a player’s overall health, body part damage and radiation level there are now hunger and thirst meters that need to be addressed. The volunteer missions from the village kiosk addressed these needs with instructions for water purification and meat preparation, so managing basic survival needs seems like it will play a much larger role in Fallout 76 than previous titles. Right after leaving Vault 76, Mowicky was attacked by Liberator MK 0 robots that resembled flying robot crabs, and it wasn’t long before wolves, giant ticks and feral ghouls made their appearance to show that West Virginia is just as nasty as Washington DC, Boston or New Vegas. 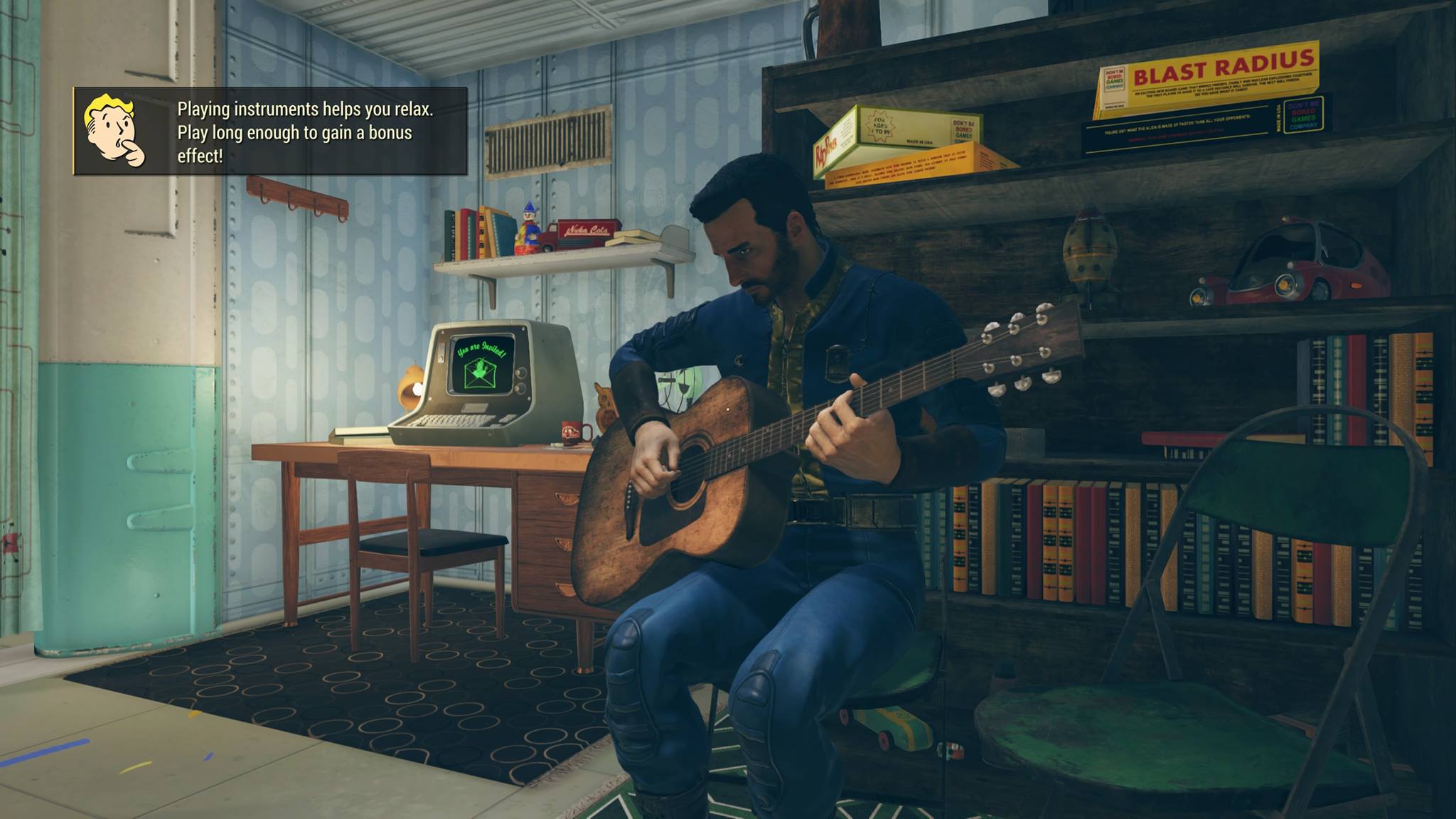 VATS has been completely overhauled for this installment. Due to the always online gameplay and the presence of other players, VATS no longer freezes or even slows time to a crawl to pull off precision crippling leg shots or right between the eyes headshots. VATS operates in real time and simply highlights the target with the percentage to hit it, and the player simply pulls the trigger to take action. VATS was actually a pleasant surprise. Personal opinion, Fallout combat mechanics without VATS are one of the weaker aspects of the games, but VATS make combat substantially more enjoyable. There was a lot of skepticism about how VATS would work in an online game and surprisingly the approach they used with Fallout 76 works well, just don’t expect any slow motion gunshot decapitations.

The visuals in Fallout 76 are impressive for the most part, with the environments being the highlight. Whether the player is inside the vault, exploring the ruins of a town or strolling through the woods, the environmental surrounds are a feast for the eyes. The nature scenes in particular are justification enough for the inclusion of a photo mode. The character models are less impressive but they are adequate for the game. The dialogue is a bit of a mixed bag, the voice acting itself is actually of a rather high standard but the script gives the impression that each character is deliberately reading off instructions for a survivor who may stumble upon their corpse. 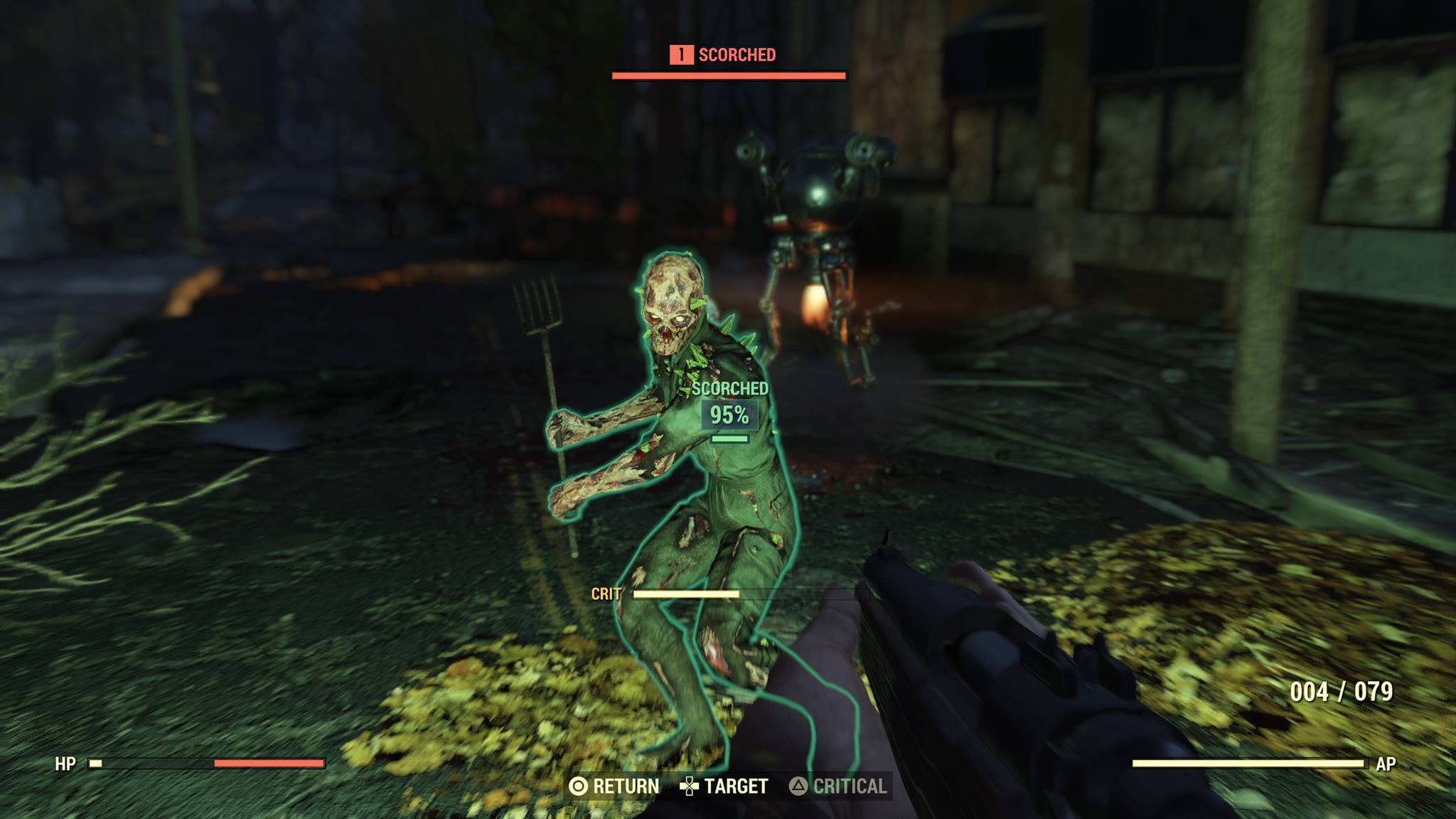 A few hours with a beta build of Fallout 76 answered some questions about what could be expected from the game, but doesn’t provide enough content to determine what the opinion of the final product may be, though it can be said it felt like a Fallout game and the few hours were enjoyable. From the beta, Fallout 76 seems like it could work as a single player title even though by design the player is encouraged to team up with other players. The entire story being told through holotapes in a world void of NPCs seems to make the world of Fallout darker than it has ever been before, but it’s too early to say whether or not this approach will end up working. Based on the time with the beta, it seems like Fallout 76 is a hybrid between Fallout 5 and a Fallout MMO. Time will tell whether this approach will please fans hoping for either of those.

Fallout 76 Preview: Like a Hybrid Between Fallout 5 and an MMO. VATS has been completely overhauled for this installment

3 Ways To Supercharge Your Gaming Experience

Are You Spending Too Much Time Gaming?