2018 marks Call of Duty’s return to the Black Ops sub-franchise with developer Treyarch back at the helm. Widely considered the ‘A team,’ fans have waited three years for Treyarch’s next title and it’s finally here. Call of Duty: Black Ops 4 brings back the team’s signature map design and balancing, but with a few new risky twists. Abandoning series conventions like a single player campaign and regenerating health, Black Ops 4 aims to deliver a radical shakeup. With a new battle royale mode, the largest Zombies experience yet and revamped multiplayer, does Call of Duty: Black Ops 4 change the game or should it have stayed classified?

Though Black Ops 4 does not feature a campaign, it does feature a short story designed to better tie the stories of Black Ops 2 and Black Ops 3 together. Taking place in the near future, the story follows the formation of the Specialists. While it’s neat to get details about six of the characters we played as in Black Ops 3 along with four newcomers, the story isn’t particularly interesting or fun to play. It mainly consists of training missions followed by a traditional multiplayer match with AI allies and enemies. It’s disappointing there isn’t a single player campaign, especially considering, aside from Black Ops 3, the Treyarch games typically have some of the best campaigns in the series.

Instead, Call of Duty: Black Ops 4 leans heavily on its multiplayer and co-op modes. It is a multiplayer-only game, which means that its survival relies entirely on the amount and quality of content on offer. The competitive multiplayer that Call of Duty revolutionized back in 2007 hasn’t changed much over the years and that’s pretty much the case here. The silky-smooth shooting mechanics are as on point as ever. Pick 10 returns to the Create-a-Class system after its absence in last year’s title, giving players the tools to craft a unique class that fits their playstyle. 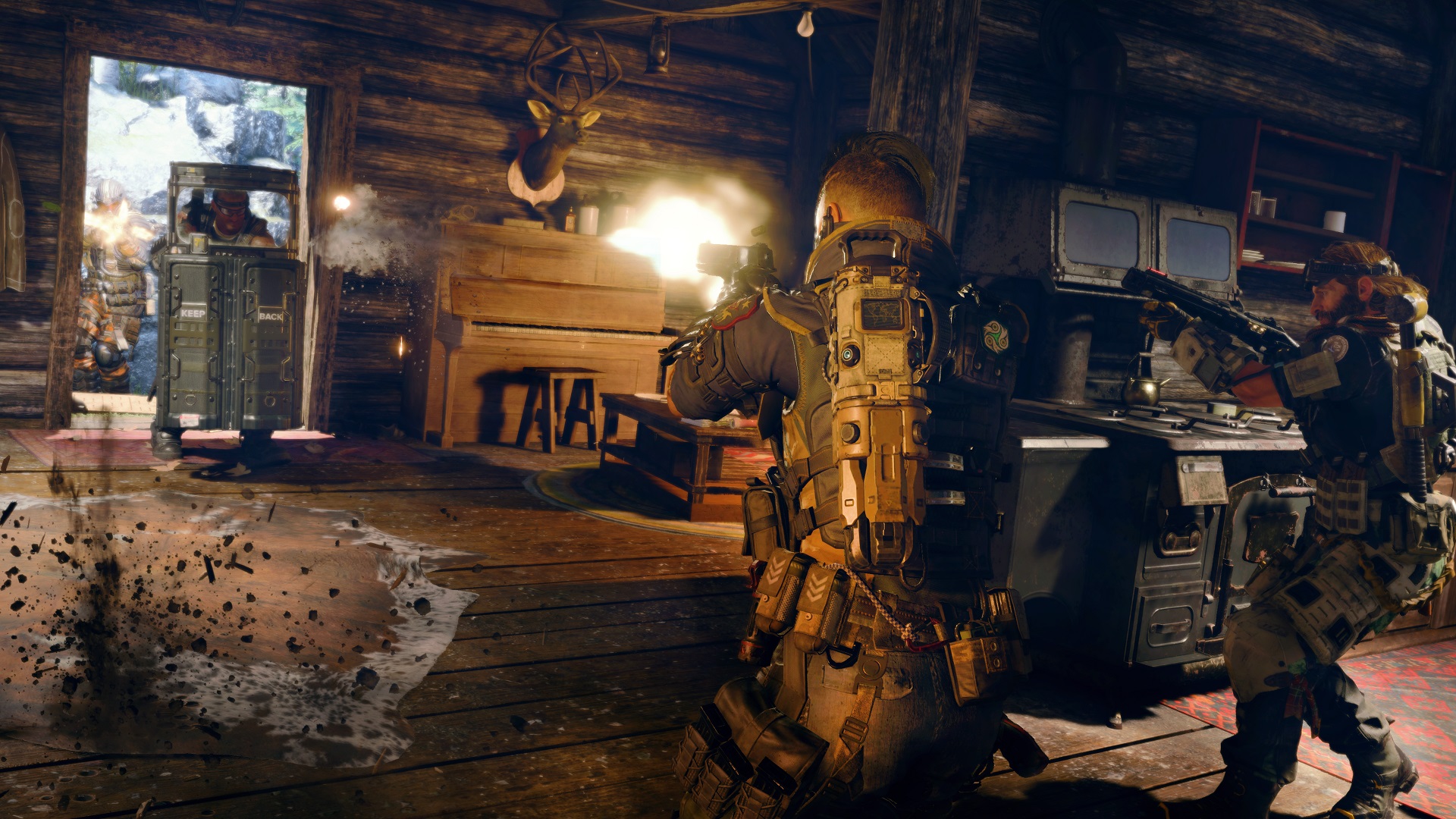 Six Specialists make a comeback with four new ones added to the pack, each with new abilities and gear targeted towards team play. Crash can place down a resupply pack and heal allies to 200 health. Meanwhile, Ajax’s flash grenade is great at disorienting multiple enemies at once and his shield is great for holding chokepoints.  While Specialists’ new roles encourage cooperation, it’s unlikely to change the lone wolf mentality that has permeated the franchise for years.

Wall-running and boost jumping are long gone with Black Ops 4 returning to a boots-on-the-ground experience and it feels good. In most ways, Black Ops 4 feels a lot like Black Ops 2 with superb weapon handling and balancing and map design. From the frozen submarine on Icebreaker to the estate in Hacienda, Black Ops 4 features classic Treyarch map design with three distinct lanes of engagement. The game comes with ten new maps at launch with an additional four remastered from previous Black Ops titles. Getting to hop into classic maps like Firing Range and Slums again is exciting and nostalgic. While it would have been nice to see more new maps, the fourteen map count and their quality is a significant step up from last year’s WWII.

Call of Duty: Black Ops 4 does try and shake up the formula in a few key ways. Treyarch aims to give each weapon its own unique personality through customization. Each weapon can only be equipped with certain attachments and scopes. For example, one assault rifle could have extended magazines, but not fast magazines. It encourages players to use weapons differently rather than slap the same attachments on each gun, but the system never felt like it had any significant impact on the game’s Meta. 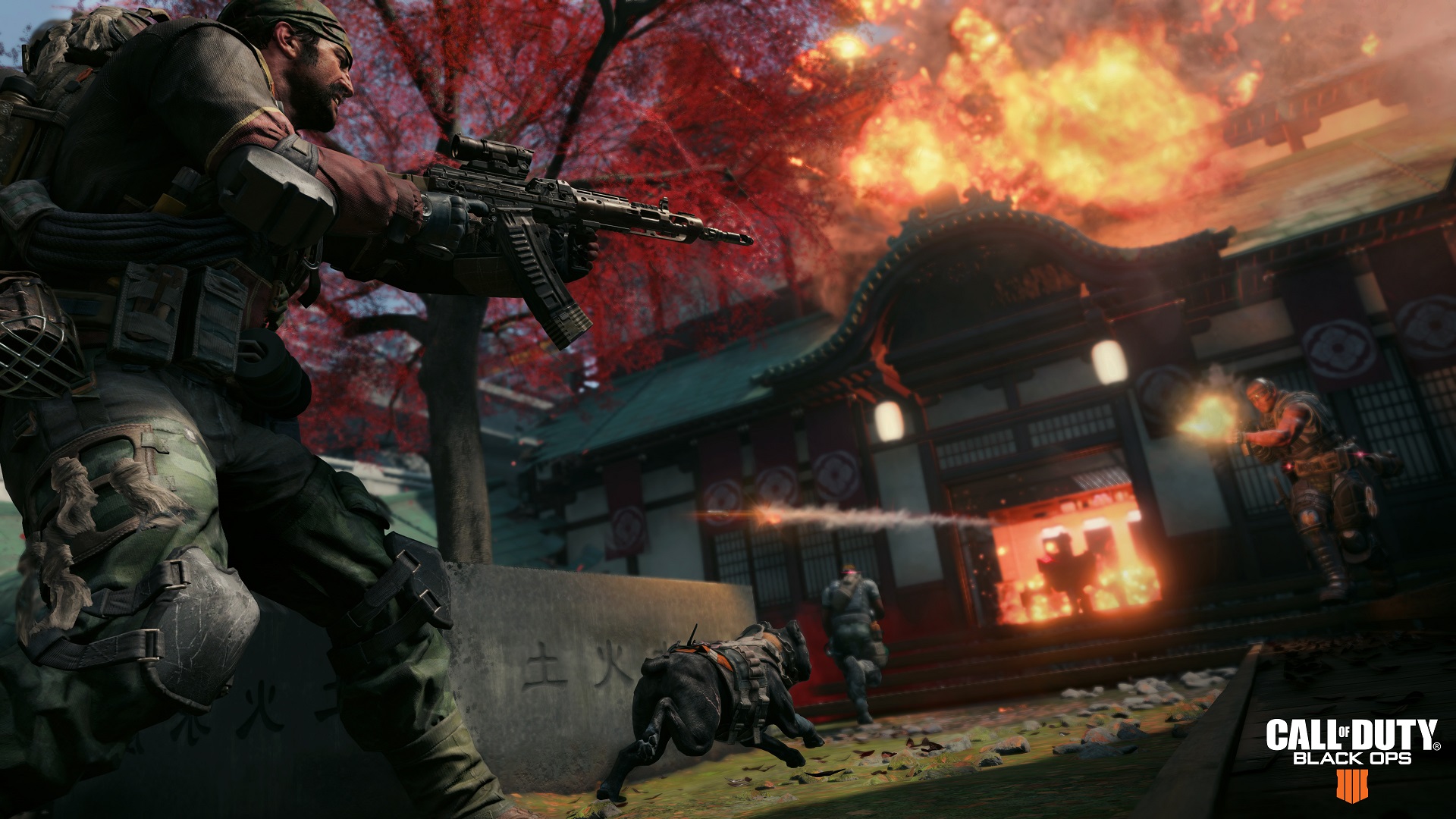 Healing has also been changed. In addition to the new 150 base health, players no longer automatically regenerate it, but must instead inject themselves with a syringe. A problem in the beta, both body army and the Stimshot felt like crutch pieces of gear with the former providing an additional 50 health and the latter providing quick healing. That hasn’t changed in the final product, though both have been tweaked to not be as powerful as they were in the beta. Still, it feels like if you’re not running them then you’re at a disadvantage.

Competitive multiplayer remains as enjoyable as previous Black Ops titles, but it lacks a hook or innovation. Black Ops introduced unprecedented customization, Black Ops 2 brought us Pick 10 and Scorestreaks, and Black Ops 3 introduced Specialists and, whether you hate it or love it, wall-running. Call of Duty: Black Ops 4 doesn’t change the formula, but instead feels like a continuation of Black Ops 2’s successful formula. While there’s fun to be had, it’s also the least innovative multiplayer in years.

The same cannot be said about Zombies. Call of Duty: Black Ops 4 comes packed with three highly entertaining Zombies maps alongside interesting new game modes like Rush. With three maps at launch available for all, Black Ops 4 is the largest Zombies offering yet and one of the best. 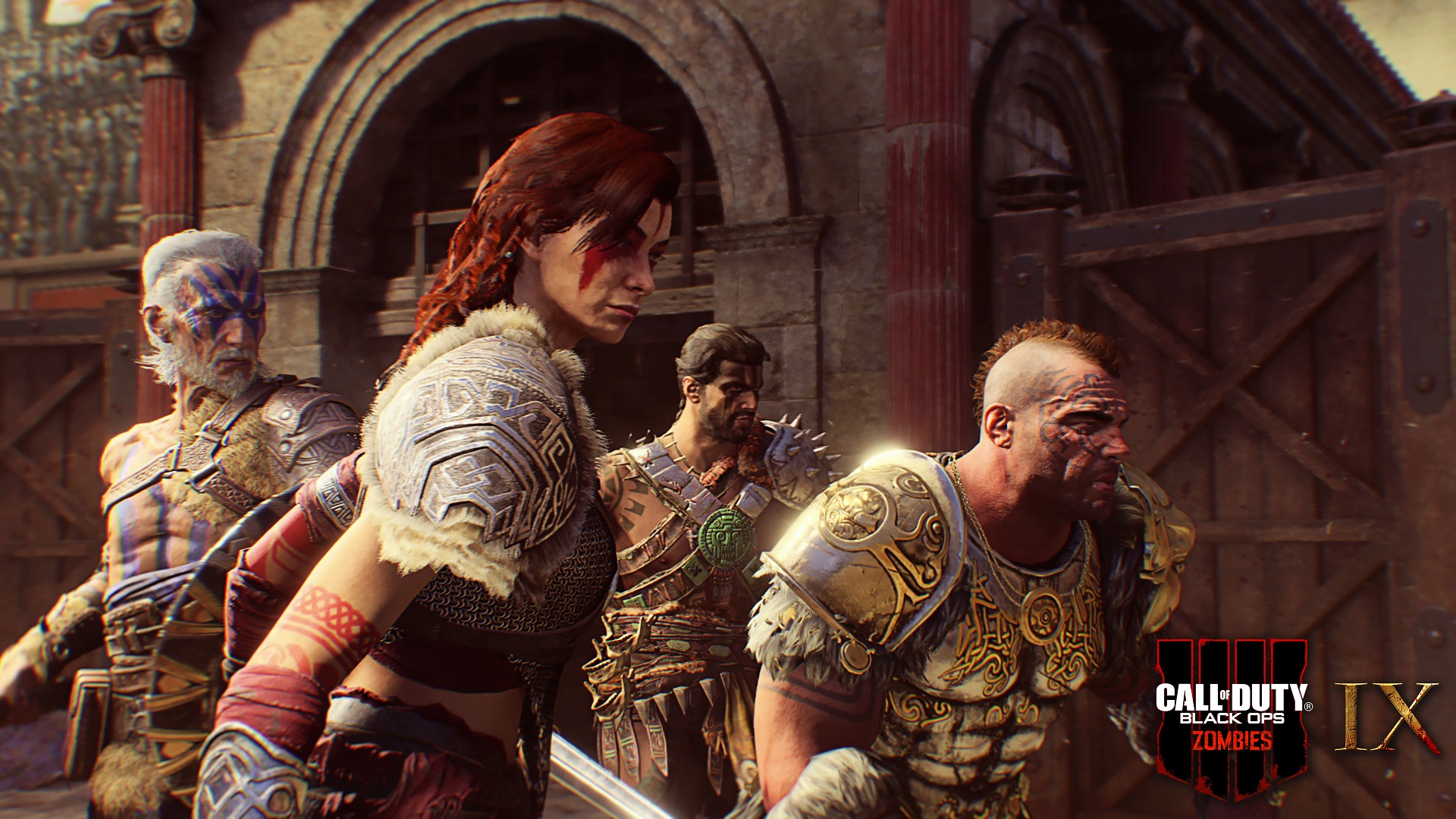 Black Ops 4 ushers in a new saga in the Zombies storyline and a return to the classic Aether story. The Chaos story introduces a new cast of characters (Scarlett, Stanton, Diego and Bruno) as they time hop to collect an ancient artifact. In IX, they happen upon a Roman coliseum where numerous captives and creatures are turned into zombies for the spectator’s amusement. With multiple levels that take players through the coliseum and down to a mausoleum, IX is the most exciting map in the game. It’s a perfect starting point for newcomers, yet contains the deep and compelling secrets Zombies players have come to love.

The adventure continues in Voyage of Despair, which sees the plague set loose on the RMS Titanic. A more linear and claustrophobic experience than IX, Voyage no less provides plenty of secrets and Easter eggs for fans to find. Finally, there’s Blood of the Dead, a remake of Mob of the Dead from Black Ops 2, which sees the return of the original Aether characters (Dempsey, Nikolai, Takeo and Richtofen). Fun and challenging, players will love jumping back into this classic map. There is a fourth Zombies map, Declassified, a remake of Five, but it is unfortunately locked behind the Black Ops Pass.

The Zombies experience can be customized to provide a more personal experience, including difficulty, health, damage and weaponry. On top of this, players can customize their loadouts with different starting weapons, equipment and special abilities. Add on top of that game modes like Rush, which fundamentally change how a Zombies match plays, and you have the best Zombies suite in Call of Duty history. 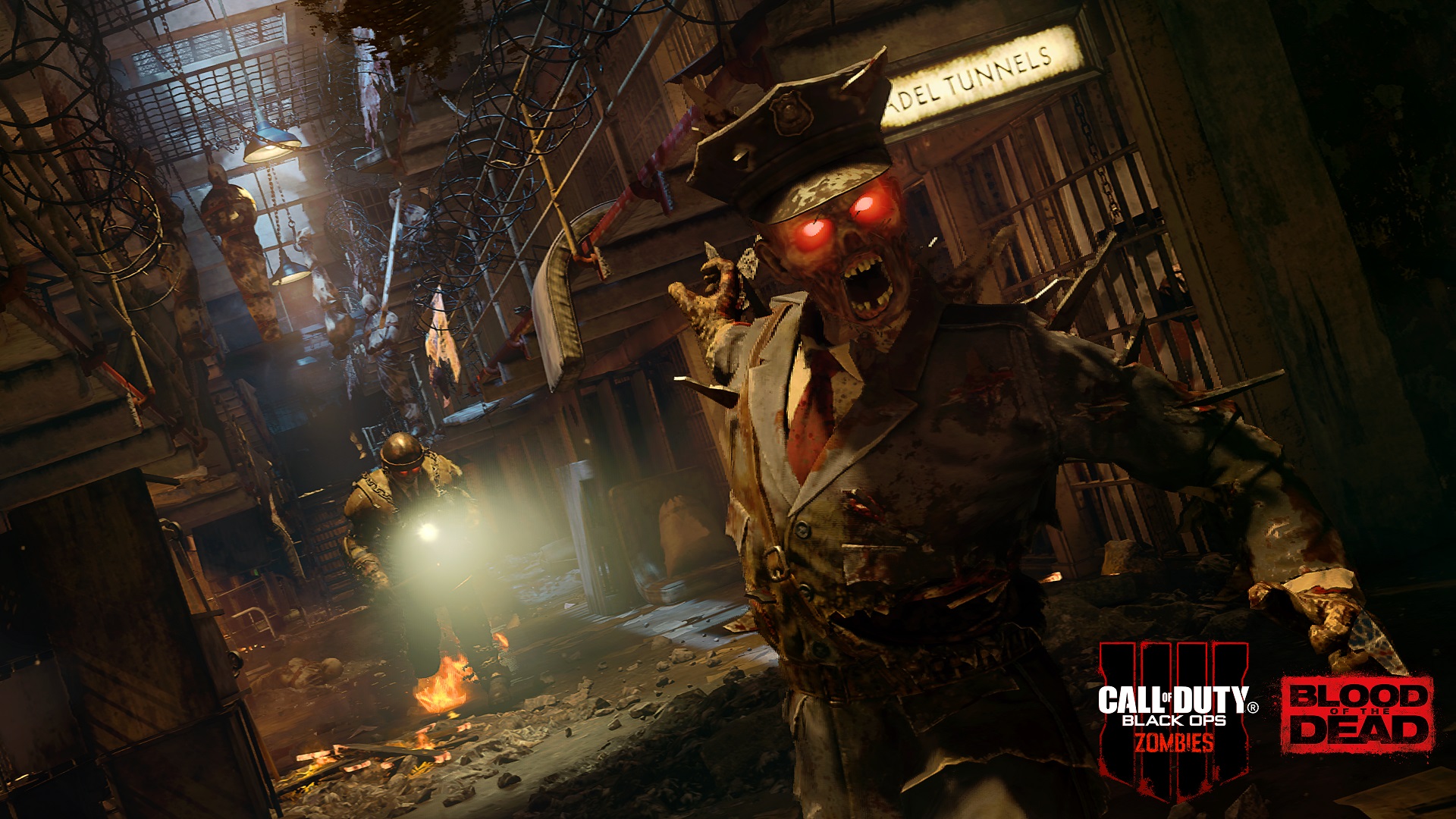 Rounding out the Call of Duty: Black Ops 4 offering is Blackout, the new battle royale mode. Though it’s sad to see no campaign this year, what Treyarch has replaced it with is good. Like other games in the genre, Blackout drops a large number of players onto a vast map where players duke it out to be the last man standing. Along the way, you’ll pick up weapons, attachments, equipment and healing items that’ll help you survive.

The map is large, covering a large swath of land and incorporating over a dozen classic locations from the Treyarch games. Well designed with plenty of flanking opportunities, the map keeps players on their toes as the collapsing circle constantly presses them towards a smaller and smaller play area. Capable of housing anywhere from 88 to 100 players, Blackout’s map never feels too big, though it is common to go large periods of time without engaging in a firefight.

Treyarch has done a solid job implementing player’s concerns from the beta. It’s now easier to pick up items and there’s more time to beat the shrinking circle and get to the new play area. Call of Duty’s mechanics fit perfectly with battle royale, and players should expect some tense games that can be exhilarating when you snag that final victory, and soul-crushing when you’re so close. Either way, Blackout is an addicting experience that continuously provides thrills.

The online experience has, so far, been a pleasant one. While it’s possible to hit some rocky matches, the servers have managed to chug along. After a few years of rocky launches, Call of Duty: Black Ops 4is easily the most stable launch for the franchise in a long time. 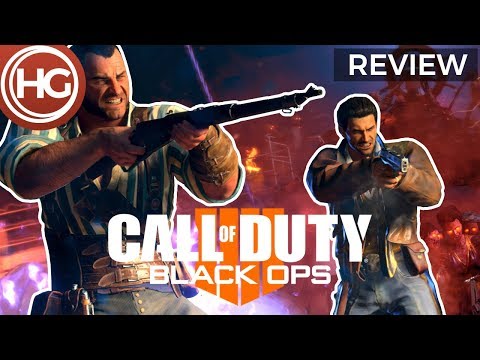 It feels good to have Treyarch back at the helm with Call of Duty: Black Ops 4. After shaking off the initial worry about losing the campaign, it quickly becomes clear that Treyarch makes up for it in other ways. The classic Black Ops formula is in full display in the multiplayer thanks to the solid shooting mechanics and map design. It may be the least innovative Call of Duty multiplayer in years, but it’s Treyarch doing what Treyarch does best and it’s a fun time. Zombies truly shines with three intricate maps that will have players diving in for hours as they pick apart each map in search for secrets. It’s Blackout, however, that’s sure to capture the most attention. The battle royale mode is slick, tense and the most exciting addition to Call of Duty in years. Call of Duty: Black Ops 4 is a solid entry in the franchise thanks to Blackout and Zombies, and though multiplayer may not having any exciting new features, there’s still plenty of fun on offer. This Call of Duty can safely be declassified.